II. SOME THOUGHTS ON OUR BEING EMBEDDED IN A MYRIAD OF FIELDS & IDEAS

Part two of poet Mike Mahoney's series of essays responding to The Blue Spark by J.P. Kruse. Painting by artist Wild Grace from her Ever Present Series. 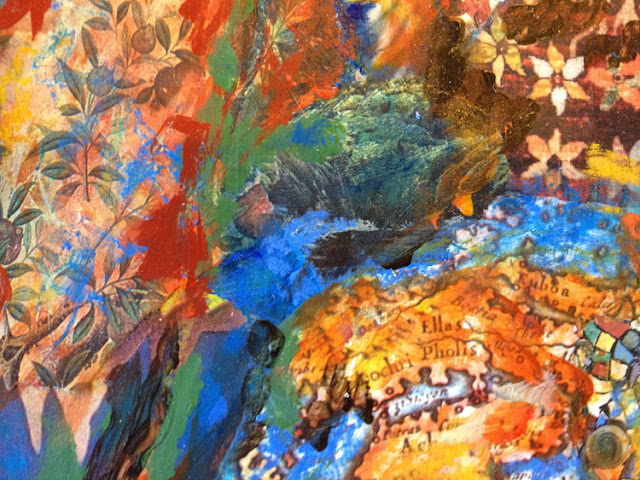 
Erected and sustained by which ideas they let in and which they aggressively stamp out, ideas are the glue of culture. In looking at the various cultures of Earth throughout history and our present day, we can catch a pretty clear glimpse of what happens when ideas are allowed to go too far – usually through initial success – and what becomes of the cultures built upon such mutations. We see this by the exaggerations of what was gained by those ideas being preserved and distorted, generation after generation; of what was lost by this junkie-like addicting to possession of specific culturally inherited ideas, inherited modes of behavior and attention; and what behaviors or ideas are brought back from previous times, dressed up and redesigned to fit the culture, of course. This is easier to see in cultures than in their individuals simply because of the large scale it takes place on. When ideas are inherited on a cultural scale, below the level of our personal awareness, they are expressed, animated, and reinforced by the unconscious behavior of the entire tribe or community, and folded over again into yet another layer of reinforcement by the compulsive need everyone feels to comply and fit in to their group. These ideas become so deeply ingrained that we often only experience them in our unawareness. As a field of our reality we never question. They become the water we swim in, so to speak, the air we breathe, and the epigenetic field we grow and live within. They become the eyes we see with, and as a result they’re ideas which people barely even notice anymore, let alone consciously engage and play with, or participate in, but rather submit to as pillars of reality, as basic facts and tenets of the fabric of life. As the condition of human nature. ‘The way it’s always been.’
Posted by Slippery Elm at 2:53 PM